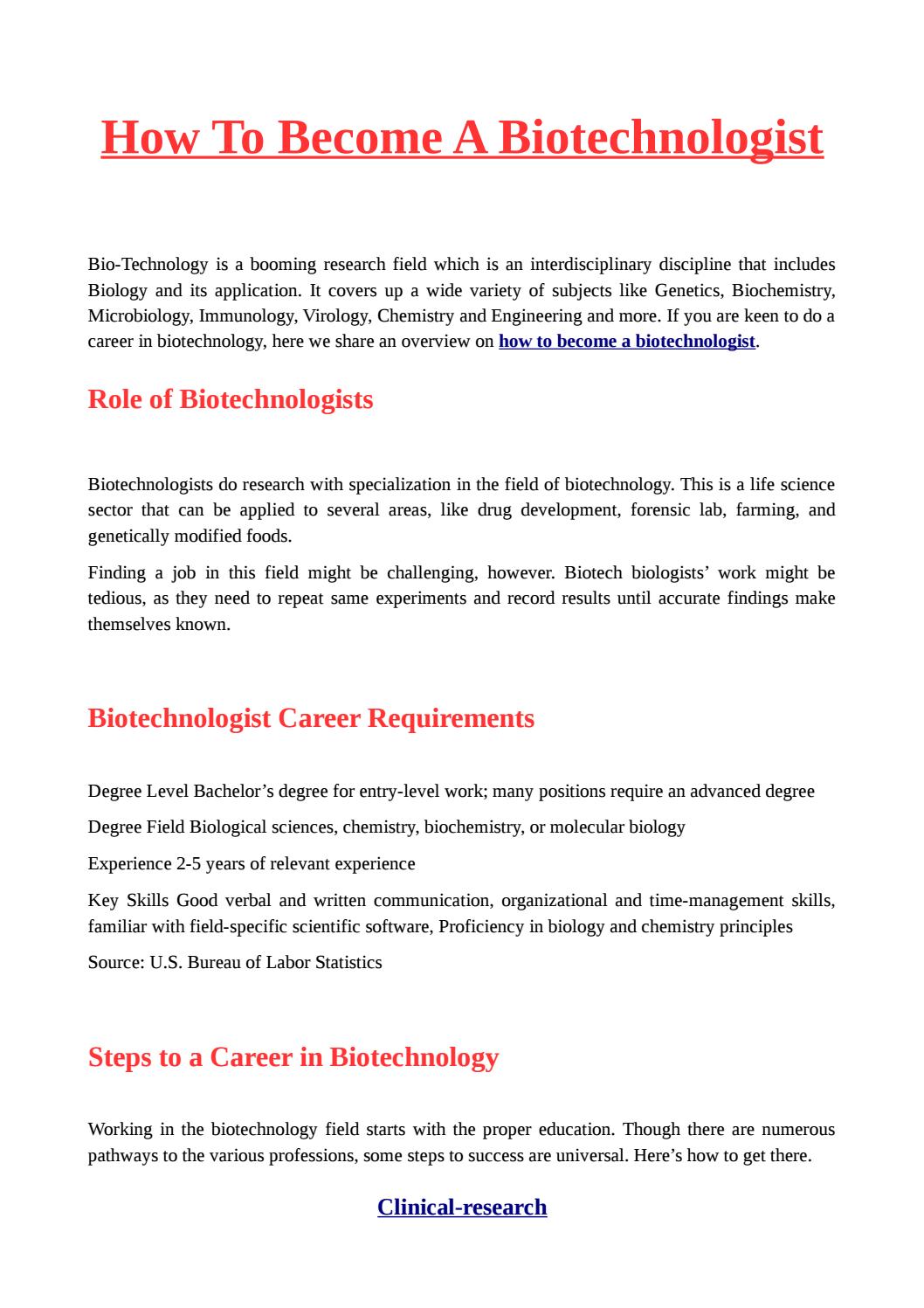 Biotechnologists are able to modify genes and do DNA ‘splicing’ to alter plant and animal species with amazing outcomes in medicine and agriculture. Biotechnology techniques are featured in a range of biological life science jobs and many people in the field do not refer to themselves as a biotechnologist as such. Recreating dinosaurs as we watched in Jurassic Park movies may not be such a far fetched myth!

Human vaccines in potatoes and developing microbes that can eat toxic spills are no longer in the realm of science fiction. Biotechnologists are working to study and manipulate cells to create useful products for pharmaceutical, agricultural, diagnostic and environmental use.

It’s all in the genes. All plant and animal cells contain DNA, which contains the genetic information governing the characteristics of a species. DNA can be changed by transferring genes between and within different species. This change to a plant or animal is known as genetic engineering or genetically modified organisms (GMOs). Scientists are able to literally ‘turn on’ desirable genes or ‘turn off’ those which are undesirable. Imagine being able to turn off the gene responsible for Alzheimer’s disease or Muscular Dystrophy?

Techniques such as polymerese chain reaction (PCR) are used to amplify and isolate different parts of DNA, in order to select desirable genes for transfer. Techniques such as micro-injecting and using retro-viruses as ‘carriers’ are used to incorporate genes into the host embryo. New organisms are then grown in test-tubes.

Biotechnologists are also involved in non DNA biotechnologies such as preparing tissues cultures, growing stem cells, using immunological methods to detect pathogens in medical research and studying animal and plant cells to develop new pharmaceuticals. Genes are identified which can add value to the wheat industry also be beneficial to the environment.

“The key thing about biotechnology is that it is only a tool to be used with conventional technologies. The goal is the products. We will only transfer genes if there is no other suitable way of developing a product'” says Chief Executive Officer of Grain Biotech Australia, Dr Ian Edwards. Edwards is part of the team developing new varieties of wheat using molecular biology techniques. The benefits to the local and global communities are enormous, according to him.

Gene technology is widely used in the world. In China they will soon have 20 genetically modified crops feeding their people. In Africa, golden rice added beta-carotine is claimed to help prevent eyes diseases among 500,000 children a year. While two American scientists, Chris Derenand and Neil Rutger had done a genetic research on a strain of the famous Thai Jasmine rice that they claim is suitable for growing in the United States. Imagine if a Malaysian biotechnologist can do something to increase our local farmer’s productivity!

Biotechnologists are needed in agriculture (plant breeding, diagnostic testing), the food industry (new ways of processing food stuffs or contamination issues), human therapeutics and diagnostics (testing for genetic diseases or developing vaccines). They can also work on various environmental issues such as researching on bacteria to threat waste disposal from factories, or cleaning up river waters in the cities.

People thinking about a career in biotechnology must have a strong bent, particularly in biochemistry, molecular biology and microbiology. Ability to work as part of a team, an analytical mind and loads of curiosity are important skills to have. Due to the strong commercial aspects to this occupation, an interest in business, commerce and profit would be very useful.

Number of places offered to study biotechnology in local universities had increased since our government recognizes the field as a potential economy sources in the future.

There are also private universities such as Universiti Industri Selangor which is also offering program actively involved in supporting government initiatives. During your study, you will be taught with several associated disciplines including biochemistry, microbiology, and genetic and biology development. You will be exposed to DNA technologies, tissues and cell culture, protein engineering, plant and animal biotechnologies and not forgetting latest research techniques or molecular biology.

If you want to progress in this profession, you must obtain higher qualifications, such as Masters or PhD in a related field. Most of our local universities do offer higher degrees in this field, but you have the choice to further studies in United States, United Kingdom, Australia, Canada, New Zealand and Japan.