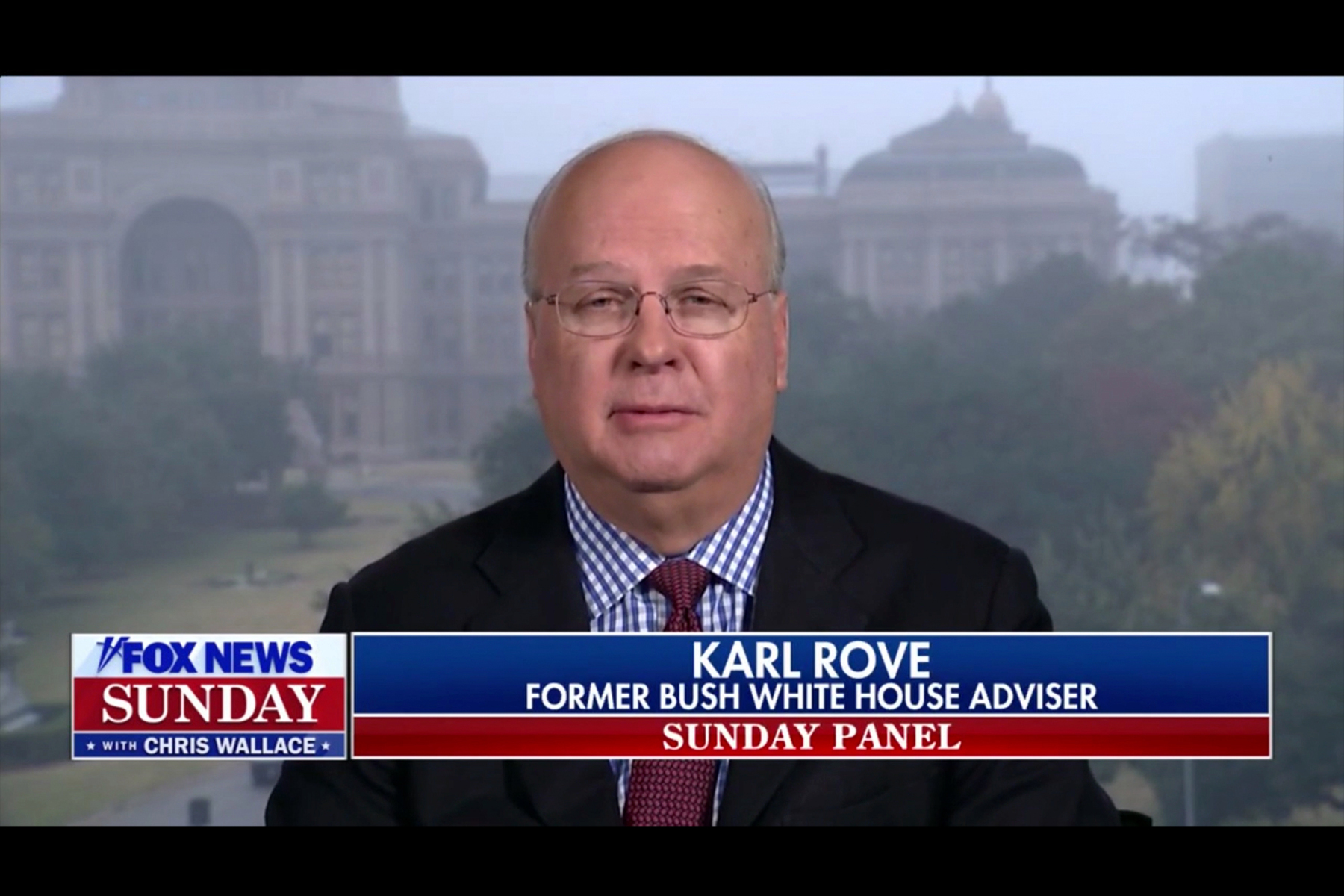 Karl Rove, the man who never saw an all-you-can-eat buffet he didn’t like, leaves the White House under the biggest cloud of disgrace faced by a member of the White House staff since H.R. Haldeman, the man who was often referred to as the Assistant President under Richard Nixon. There is not one piece of policy or campaign issue that Karl Rove has not been involved in since George W. Bush moved into the Oval Office. Karl Rove was instrumental in every single one of the litany of failures that has befallen this administration and also takes blame for the fact that this White House cannot point to a single success. So what does Karl Rove do almost the minute he is out of the White House? Does he seek the anonymity that other failures of massive proportions have historically sought?

No. Karl Rove goes on the radio show hosted by the Big Fat Liar to showcase his inestimable political brilliance. Karl Rove announces with all the superiority that has been the hallmark of this administration that has been more arrogant than any other with less reason than any other that Hillary Clinton cannot get elected because no candidate with her negative opinion figures has ever been elected President. One may well contemplate listening to what Rove has to say on this issue.

After all, if there is anybody in this country who should know about negative opinion ratings it would be Karl Rove.

Karl Rove is often given credit for being the brain trust that took George W. Bush from being an alcoholic failure at everything he ever tried-from oil drilling to running a baseball team-to the White House. The fact that Rove’s so-called tactical campaign brilliance required the single worst decision in the history of the United States Supreme Court and massive voter fraud involving the brother of his candidate seems to have been forgotten. Following the attacks of 9/11, nobody in the world benefited more from the outpouring of goodwill than George W. Bush. Take a look at some video and photos from those heady days in the months following the 9/11 attacks and you will see a big fat smile on big fat Rove’s big fat face. And why not? His beloved was experiencing historic approval ratings. Shortly after the attacks of 9/11 Pres. George W. Bush had approval ratings of 88%. Almost none of that was due to anything that Bush had actually done or anything that Karl Rove had engineered for him policy-wise. It was pure political backsplash that sent Bush’s approval ratings through the roof. In those halcyon days when 88% of Americans expressed their approval of the way that George W. Bush was handling things-despite the fact that he really wasn’t handling much at all-Karl Rove formulated a plan to capitalize on that good feeling. The next six years saw Karl Rove orchestrate the Presidency of George W. Bush. Karl Rove was intensely involved in everything from Iraq to trying to put the future of Social Security into the hands of Dean Witter. Every single policy decision that George W. Bush had made in the last six years went through the office of Karl Rove.

In other words, Karl Rove guided Pres. George W. Bush’s approval ratings from 88% to 35%. That’s over a 50% drop, just in case you didn’t get it. That 88% had nothing to do with anything Bush actually did. The 35% has everything to do with what he’s done, or didn’t do. And that 35% can all be traced back to the wit and intelligence of Karl Rove. The point? If I were Hillary Clinton, I wouldn’t be too terribly concerned with Karl Rove’s opinion on much of anything. His boss’ approval ratings are proof enough that Karl Rove is about as qualified to give out unsolicited political advice as Lindsay Lohan is to give advice on how to handle fame at a young age.